Up In Smoke: DoD, Ineffectiveness, and the Distracting Persistence of Counternarcotics – Modern War Institute

This full story is found on MWI: Up In Smoke: DoD, Ineffectiveness, and the Distracting Persistence of Counternarcotics – Modern War Institute:

Department of Defense support to counternarcotics in the Western Hemisphere and beyond should serve as a warning sign for policymakers focused on strategic rebalancing. The secretary of the Navy highlights strategic priorities heavily focused on the People’s Republic of China (PRC) as a pacing threat; the commandant of the Marine Corps proposes a vastly new concept of operations; and the Army struggles with the competing demands of modernization and budget pressure. A new DoD report even highlights the accelerated pace of the PRC’s nuclear expansion with capabilities far exceeding previous expectations. But a strategic shift doesn’t always translate to changes in bureaucratic structure. Service- and department-level strategic visions compete against regionally focused combatant commands driven by current threats in their areas of responsibility.

Fifty years of failed results in the Western Hemisphere and globally cast strong doubts on the efficacy of DoD’s counternarcotics efforts. Moreover, even the landscape of today’s domestic drug epidemic is far different from the interdiction and the reduction model focused on the supply side that DoD has employed. With many advocating that DoD must shed some missions and accept some risk to focus on competition with rising powers, the logic seems clear: counternarcotics is an ill-fated venture at campaigning below the level of armed conflict. Yet the support continues, to the tune of more than $800 million if the chairman of the House Armed Services Committee’s mark on the FY22 National Defense Authorization Act (NDAA) is any indication. It is a figure that has remained remarkably consistent in recent years, totaling over $10 billion alone since the start of the pivot to Asia. Now, continued support threatens to continue to sap resources in an increasingly constrained environment.

The Only War We Had

In 1990, General Maxwell Thurman, then commander of United States Southern Command, remarked the drug war was “the only war we’ve got.” His statement, made amid the collapse of the Soviet Union, end of the Cold War, and threats to the DoD budget, was logical at the time. Throughout the Cold War, DoD relied on technical capabilities to detect possible Soviet incursions that could now be used to monitor for counterdrug purposes. DoD support to law enforcement and drug enforcement agencies began long before General Thurman’s post–Cold War vision. In the early 1970s, DoD provided air surveillance and radar assets to aid other agencies with capabilities uniquely situated within DoD.

In the late 1980s, myriad threats continued to evolve in the Western Hemisphere. Notably, a strong drug trade emerged throughout Latin America, causing significant disruption in the United States. In response, DoD absorbed greater responsibility for support to law enforcement agencies and Congress subsequently granted DoD an unusual statutory authority to serve as the lead agency for detection and monitoring (D&M) of aerial and maritime transit of drugs into the United States. D&M operations were limited to the air and maritime domains and required close coordination with US and foreign security forces to prevent encroaching on the sovereign territory of partner nations.

By 1990, DoD statutory powers had expanded from D&M to active support of federal agencies and foreign governments. Specifically, the 1990 National Defense Authorization Act stated that DoD may provide support including transportation of personnel from federal agencies and foreign countries for the purposes of counterdrug activities, the establishment of bases for facilitating counterdrug activities within or outside the United States, counterdrug-related training of law enforcement personnel from the United States or a foreign country, and aerial and ground reconnaissance outside, at, or near US borders. The legacy of the 1990 NDAA still exists today through Joint Interagency Task Force–South and Joint Interagency Task Force–West, both charged with coordinating counterdrug activities in their respective areas of responsibility. Annual renewal of the 1004 authority, which permitted the secretary of defense to provide support to other US agencies’ and foreign governments’ counternarcotics activities, continued from 1990 until 2017 when it was finally codified as permanent law in 10 US Code § 284, a result of major reforms in DoD-led security cooperation authorities.

Little has changed for the security environment in Latin America as illicit trafficking in drugs, weapons, and people continues to thrive. However, senior leaders draw direct linkages between illicit trafficking and external state actors in an attempt to underscore why the counternarcotics mission should continue to expand. Yet, despite an increase in DoD expenditures, US influence in Latin America is waning and the drug epidemic only continues to grow.

Three concrete policy challenges arise from the continued funding for DoD’s counternarcotics support: (1) continuing the funding with little correlation to success shows weakness in the strategy formulation process, (2) forming US military-to-military relationships with partners through a counternarcotics paradigm prevents a refocus in the region, and (3) it consumes resources and readiness that have greater value elsewhere.

Fifty years after President Richard Nixon’s declaration of the war on drugs, there are ample and growing reasons to doubt that DoD’s support produces tangible results. Since the onset of the new statutory authorities in the 1980s and 1990s, critics have not missed an opportunity to highlight the expansion of the role of the US military in counterdrug operations and question the efficacy of the policies that drive such an endeavor. But criticism was not only reserved for journalists, pundits, and nongovernmental organizations. Policymakers, including then Senator Joseph Biden and Attorney General Janet Reno, have likewise questioned the merit of an enduring military role in the war on drugs and its return on investment.

Today, the argument is perhaps sharper as evidence indicates that DoD’s support hasn’t impacted cocaine prices or availability and casts doubt on whether counternarcotics support provides a true nexus for cooperation with international partners. Establishing counternarcotics as the cornerstone of security cooperation and capacity-building programs forces partners to make costly political decisions. For example, an increase in fumigation operations in return for US support may undermine support among local constituents and invite challenge from political opposition opposed to the United States, a paradigm that inherently complicates a drive to build coalitions and counter the influence of extraregional actors. A strategic focus on great power competition puts a greater emphasis on the ability to build partnerships and calls into question a strategy that runs the risk of isolating existing partners and disincentivizing the formation of new partnerships.

A focus on encouraging counternarcotics as a key element of defense relationships might also simply be a wasted effort; states happily take US military aid to counter drugs while in turn seeking alternative partners to assist with economic and technological advancements. For example, China pursues a more pragmatic approach that seeks to decouple economic influence from political alignment. While DoD played an integral role in coordinating interagency efforts in the early years of the drug war, the board is now set to ensure our partnerships can’t survive a shift in the controlling political party and invites the political opposition to consider alternative foreign partners. This is poor strategy.

A Hard Ship to Turn

Today’s gaps in force posture are legion and range from broad modernization efforts to sharp needs to increase shipbuilding capacity. Given such significant gaps in current force posture, what then keeps DoD focused on fighting an outdated version of the drug war and not refocusing nearly $1 billion annually into today’s strategic objectives? There are many structural factors that make it difficult for DoD to shift its resources. A recent article questioned the power of combatant commanders in focusing resources on regional issues vice strategic goals, underscoring whether or not the combatant commander’s strategies are “practical, driven by strategy, and bound by reality.”

This gap is exacerbated by two collateral factors: the incorporation of this mission set into statutory authorities, and the burgeoning work force that continues to focus solely on missions such as counternarcotics without any regard for changes driven by strategy. Both elements were incorporated into the mission to ensure efficiency. In fact, they might also act to make the mission permanent. Moving away from counternarcotics is even more challenging when it has formed the primary forum for military-to-military engagement with many partners. Consider that even in today’s strategic environment, one of the US Army’s principle touch points with Colombia is the deployment of counterdrug advisors. This is not to suggest that DoD should abandon its military-to-military relationship with its partners. Rather, emphasizing traditional military roles through exercises and training that are not confined within the limits of a counternarcotics paradigm.

Nonetheless, a recent report challenges the current paradigm of DoD with partners and allies asserting that “today, U.S. aid to build up a partner’s military should be viewed through the lens of competition between states,” reinforcing the necessity of campaigning through cooperation and below the level of armed conflict. The report emphasizes that military aid has historically become bifurcated from overarching foreign policy objectives, evidenced by the onset and proliferation of counternarcotics authorities granted to DoD. In line with this, realigning security cooperation funding from DoD to the Department of State would permit DoD to focus on strategic priorities set forth in the National Defense Strategy. The Department of State, through the Bureau of International Narcotics and Law Enforcement Affairs, already boasts a $1 billion budget focused on building partner capacity to counter drugs and crime through law enforcement and strengthening criminal justice systems. This shift would allow the Department of State to ensure counterdrug efforts conducted by law enforcement and military-to-military cooperative relationships do not become redundant.

There are many tragic casualties of the drug war in the United States—but for DoD the most pressing is readiness. While it is evident that that the war on drugs has not worked, policymakers and DoD continue to stress the significance of counternarcotics operations, which is odd as the mission seems to address an old iteration of the drug epidemic focused on measuring success through seizing kilos of cocaine and not today’s opioid epidemic. In the same breath, senior leaders emphasize the importance of global competition and the challenges of a dynamic security environment.

Today, most criticism is levied against the militarization of law enforcement policy that further fuels the violent cycle of the drug trade. Indeed, little has changed since the Los Angeles Times reported a congressional official saying in 1989, “We pressed the Pentagon’s button. . . . Now it’s going to be hard to turn them off.” Unable to react to significant political shifts in the region or address failed states, DoD remains committed to the drug war because it is simply not structured to compete below the level of armed conflict in certain regions.

The forthcoming national security strategy provides an ideal opportunity to reexamine DoD’s statutory role in counternarcotics support. DoD absorbed greater responsibility for counterdrug activities because US law enforcement was not resourced to execute that mission. Today, the Department of Homeland Security boasts its own unique capabilities ranging from special operations to air and maritime assets that surpass those of US law enforcement in the 1990s. Similarly, the US Coast Guard now brings advanced assets to maritime security efforts and leverages its law enforcement competencies in operations with partner nations. One of the keys to the current, and future, strategic shifts will be policy reform focused on eliminating the statutory and budgetary structures that are delinked from the analysis of outcomes. It is time for DoD to step away from its legacy role in counterdrug activities.

Chris Bernotavicius is an active duty commander in the US Navy and a foreign area officer specializing in Latin America. He is a military fellow at the Center for Strategic and International Studies and an adjunct fellow at the US Naval Institute.

The views expressed are those of the authors and do not reflect the official position of the United States Military Academy, Department of the Army, or Department of Defense, or that of any other organization the authors are affiliated with, including the Center for Strategic and International Studies. 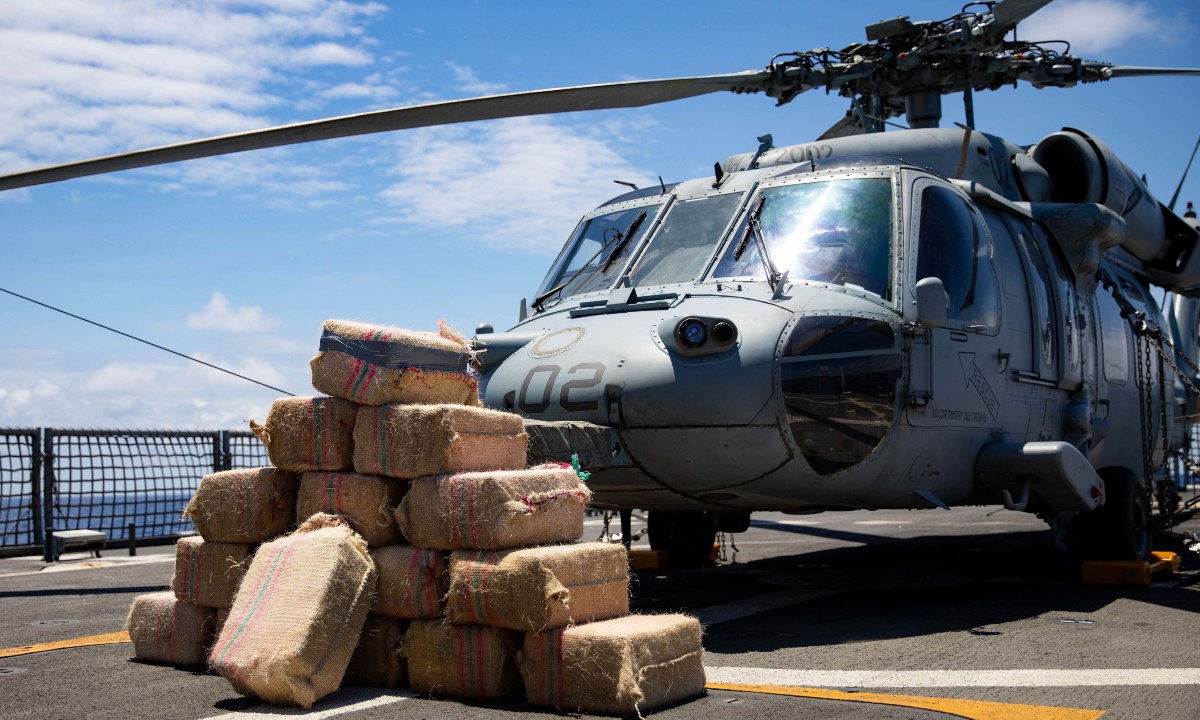