This full story is found on MWI: The Primacy of Passive Air Defense – Modern War Institute:

On a distant Pacific Island battlefield, a section of US Army air defenders mans its perimeter on a relatively quiet night. The war, if you could call it that, had carried on for years. The US government continued to slog through painful negotiations with an adversary determined to leverage the American public’s growing disdain for the conflict against the diplomats and senior military officers. The air defenders, observing no threats on their state-of-the-art radar, turn their conversation to the upcoming baseball season. One soldier, tired of the banter, turns the radio to his favorite broadcast for a moment of solitude. Like the rest of his section, he is entirely unaware that a cheap, low-tech biplane is rumbling toward the air defenders’ position, flying so low that the highly advanced American radars cannot distinguish the enemy plane from the surrounding ground clutter. Without warning, a tremendous blast throws him across his entrenchment—his right side numb and seemingly dysfunctional—but he is the lucky one. On the other side of their firing position, his fellow soldiers lie dead, with their gun emplacement twisted, disfigured, and completely destroyed.

This story embodies many of the anticipated characteristics of future warfare. But it is not an imagined one, set in 2043 or 2033. It is the story of real events that took place on April 15, 1953. It is the story of the last successful enemy aircraft attack against US soldiers. In this case, the culprit was likely a Soviet-built, North Korean–operated Polikarpov Po-2 biplane. Rather than attempt to outfly and outcompete the advanced US Air Force jet fighters head to head, the North Koreans resorted to asymmetric tactics, using cheap, easily operated aircraft to terrorize US ground forces with psychological ramifications stretching much farther than the relatively limited tactical ones. Since that moment, the US Air Force and Army air defense capabilities have protected ground forces with a perfect record: not a single servicemember on the ground has been killed by an enemy aircraft since that day.

Unfortunately, the future does not look promising. Both peer and irregular adversary forces continue to grow a massive arsenal of armed and kamikaze-style aerial drones—capable of inflicting far more than just psychological damage to US ground forces. From battlefields stretching across the Caucasus, Saudi Arabia, Ukraine, Syria, and elsewhere, the proliferation of advanced drones and accompanying tactics is almost certain to spell the end of US air dominance and nearly guaranteed protection for ground forces. While the Army is developing much-needed active air defense modernizations, adversaries will almost certainly continue producing and proliferating drones and aerial threats far faster than the Army can hope to defend against. This is why passive air defense, or measures to minimize the effectiveness of hostile air defense (without attempting to destroy the threat), will continue to serve as the most important countermeasure for the majority of Army units. Passive air defense measures include detection, warning, camouflage, concealment, deception, dispersion, and sheltering. Before employing any of these techniques, however, units must begin by getting one thing right.

While it may sound cliché, the best passive air defense begins with robust mission analysis and intelligence preparation of the battlefield. In the same manner that tactical units prepare to defend against enemy artillery and tanks by understanding composition, disposition, strength, capabilities, and course of action, so too must staffs plan and prepare for the plethora of unmanned and manned aerial threats. By understanding how the enemy intends to employ its reconnaissance and kinetic-strike unmanned aircraft systems (UAS) in addition to manned rotary- and fixed-wing capabilities, staffs arm their commanders with information required to protect their forces. Commanders can then, for example, request appropriate digging assets for protecting their forces while maneuvering their units accordingly.

By producing a detailed scheme of protection and corresponding Annex E to an operations order—which covers protection—a battalion staff enables company commanders to prepare their units to detect incoming aerial threats. Soldiers who understand the threat are prepared to observe and detect them using long-range optics or audible signature. This provides the company (and perhaps the battalion) with the early warning required to either move into prepared fighting positions or cease movement and report to higher headquarters. From here, the higher headquarters may be able to employ active air defense measures to destroy the threat.

Camouflage and concealment degrade the enemy’s ability to accurately assess friendly composition and course of action, complicating the enemy targeting process. While enemy sensors may be able to detect the presence of camouflaged friendly forces, many UAV operators, especially using the smaller and less capable Group 1 and 2 equivalents (categories of aircraft weighing less than fifty-five pounds and flying lower than 3,500 feet above the ground), will have a difficult time identifying the friendly asset with absolute certainty. In a world of limited munitions for targeting, this matters. This may mean the difference between the enemy decision to conduct a kinetic air or indirect fire strike, or to completely bypass an uncertain target in search of more certain ones.

Deception operations mislead enemy forces so they take specific actions (or inactions) that enable friendly units to accomplish the mission. As part of combined arms maneuver, deception is critical to protecting against enemy aerial threats. Field Manual 3-13.4, Army Support to Military Deception, provides an overview of how units can plan to deceive enemy forces through ambiguity increasing or decreasing operations. The former makes the enemy less certain of friendly intent, whereas the latter guides the enemy toward incorrect beliefs about friendly actions and intent, thus bringing the wrong assets into play, or focusing operations at the wrong place or wrong time. In terms of defending against modern unmanned or manned air threats, both methods reduce the enemy’s ability to accurately detect and target friendly forces. With the growing worldwide proliferation of unmanned aircraft, using decoy radio signals, constructing makeshift decoy assets, and positioning real assets for deceptive effects can have a significant impact on enemy decision making, thus protecting friendly forces from above.

All soldiers, no matter their military occupational specialties, learn the value of dispersion during basic training road marches. By maintaining five meters of separation from one another, a well-thrown enemy grenade may wreak havoc for an unlucky soldier or two, but the squad will remain intact and capable as a unit. This principle applies with equal validity to passive air defense. By adhering to doctrinal principles of dispersion, units reduce the likelihood that they will be targeted—and even if they are, they will at least ensure they remain mission capable in the aftermath. Sheltering, either through individual or vehicular fighting positions, or even simply using adjacent terrain, remains a time-honored and increasingly urgent method of protection against increasing aerial threats. Combining both dispersion and sheltering is, of course, the optimal action. In a sense, if China can combine these methods to protect its newly discovered missile silos against nuclear weapons, then US Army units can do the same against more conventional airborne threats.

Like many principles, applying those of passive air defense is easier said than done. US Army units must actively train to counter the growing threat of enemy unmanned and manned aircraft. But rather than include this training as an additional requirement, units should instead incorporate it into preplanned events such as collective gunnery and other field exercises. At the battalion level, units must deliberately plan against a realistic enemy air threat. By doing so, staffs can plan to emplace their command posts in terrain that minimizes detection and produce orders that inform subordinate companies of the realistic threat. Companies should incorporate unmanned aerial vehicles into vehicle identification drills that previously focused on legacy ground and manned enemy air threats. Company commanders should also use their organic UAS at every practical opportunity. This accomplishes two objectives: (1) training their own operators for offensive and defensive operations, and (2) training subordinate platoons to defend against Group 1 UAS. By training rigorously at home station now, units will arrive better prepared against the myriad of threats at major training centers and, if called upon, in combat.

In the race between adversarial airpower and active air defense, the proliferation of kinetic, kamikaze, and potentially swarming unmanned aircraft portends a growing dominance by the former. Regardless, no matter how lethal or prolific enemy aerial capabilities may become, passive air defense principles will be vital for Army units. Unlike standalone Navy vessels and concentrated or target-rich Air Force facilities, Army ground forces are already the most difficult to destroy given a limited number of munitions. But whereas air and naval assets can remain in the fight even with added standoff distance to protect themselves, ground forces have no such luxury. Passive air defenses are thus key to remaining difficult to target from above. Units that rigorously train on employing passive air defense techniques maximize their survivability on the modern battlefield.

Capt. Harrison “Brandon” Morgan is a US Army officer and MWI nonresident fellow serving as a master’s student at Johns Hopkins School of Advanced International Studies. He previously served in company command, staff, and leadership positions in the 1st Infantry Division and the 82nd Airborne Division. His operational experience includes three nine-month deployments to South Korea, Lithuania, and Iraq. His research and publications explore the challenges and opportunities within Army modernization, Army force structure, and subterranean operations. Brandon is also a proud member of The Company Leader Forum, where he serves as an associate editor and helps new Army writers find their voice. His other hobbies include riding electric scooters in DC traffic, cheering for the New England Patriots, and responsible bourbon tasting. He tweets at @H_BrandonMorgan. 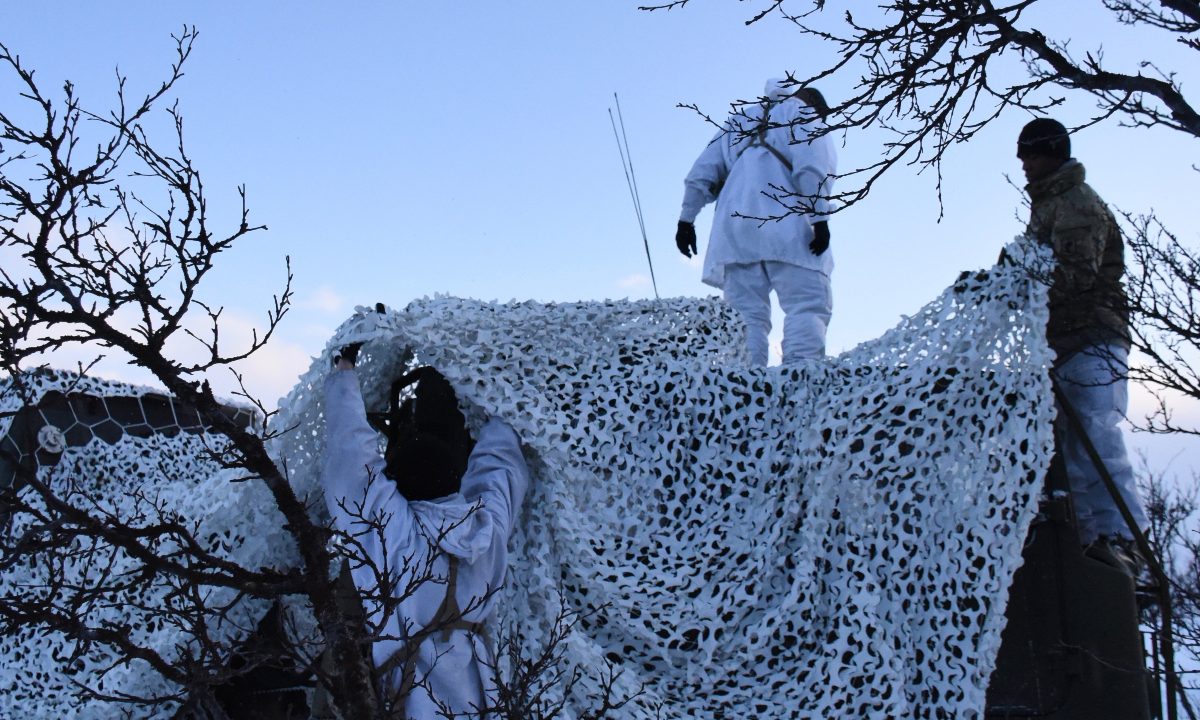