Succeeding on Shifting Strategic Ice: Lessons for the US Military from a Century-Old Story of Leadership and Survival – Modern War Institute

This full story is found on MWI: Succeeding on Shifting Strategic Ice: Lessons for the US Military from a Century-Old Story of Leadership and Survival – Modern War Institute:

It’s October 29, 1915. Ernest Shackleton, having abandoned ship onto the frozen Weddell Sea, called his crew together. A ragtag group of twenty-eight men of varying professions, their circumstances were dire. Shackleton, the commander of the expedition, removed a gold cigarette case and gold sovereigns from his pocket, throwing them into the snow. Gold was useless to him, he told his men. Next was the Bible. Queen Alexandra had given him this Bible before their now ill-fated Antarctic expedition; he tore three pages from the book and laid the remnants of it in the snow. Empty words were useless to him. Finally, the sled dogs’ puppies: he ordered them killed. Away from the men behind a pressure ridge, the dog Sirius excitedly jumped up onto Alexander Macklin. When Macklin found his composure, he took out a shotgun and placed it to the dog’s neck. With an unsteady hand, he had to do the unthinkable. But it was necessary. Shackleton’s mission had changed during the course of his expedition. Everything that was extraneous he and his men left behind; everything that could not pull its weight could no longer be afforded life. Alfred Lansing, in his history of the Endurance voyage, sums up the dire situation, saying that “no article was of any value when weighed against their ultimate survival.”

This decisive act of leadership by Ernest Shackleton was the first in a prolonged battle against an unforgiving world, a battle in which he and his men ultimately prevailed. And it is a lesson military professionals should study as the United States closes one chapter of its history and embarks into the era of strategic competition. Analyzing what Shackleton took with him and what he left behind offers a framework within which military professionals, in this moment of reflection, should ask themselves two questions: What have I accumulated over the last twenty years that could be my downfall in the next chapter of my journey? And what do I have that is going to save my life no matter my future circumstances?

With his ship, Endurance, crushed in the ice, Shackleton’s expedition was now stranded on a frozen sea. Eight hundred miles from the nearest inhabited outpost, the life rafts they salvaged were their only chance out of the Antarctic alive, but they were also useless in their current situation. The men and their dogsled teams would have to transport their boats and supplies, ten sleds in total, each weighing more than eight hundred pounds, through snow two feet deep and across the icy and perilous surface of the Weddell Sea, an undetermined distance, until they reached the savage waters of the Southern Ocean. There, and only there, they would have their chance, their opportunity to live.

What Shackleton Left Behind

With a tortuous journey ahead of him, Shackleton left behind gold—literal gold. To Shackleton, it was a memento of a prior life, when his mission was different. He had set out to be the first man to cross the Antarctic. Even on this planned two-year expedition at the end of the earth, there was room for some luxuries. But now, when the survival of his men was in question, gold was worthless and stood no chance of helping him at any point in his new mission.

The Bible was next to be sacrificed. The scriptures, numerous as they are, were not all necessary; he needed only a few to guide him. He carefully removed three pages, and respectfully laid the rest of the book that the queen had given him, in the snow. Ancient parables, and items of sentimental value, had no place in the task at hand.

Finally, he left several young puppies. Shackleton’s sled dogs were essential to the survival of his team. And on his prior mission, the puppies had a place. Over the coming months crossing the Antarctic, they would have soon been able to pull their weight and would have replaced the current crop of sled dogs as they became fatigued and injured. But with the change in mission, the time to pay one’s dues came early. While the puppies had potential, potential tomorrow was no use to Shackleton today and he had them culled.

What Shackleton Took With Him

Shackleton knew that to reach the open sea, his expedition would have to travel light, taking with them only the supplies they needed. What did he determine was necessary for their survival?

Shackleton had three life rafts aboard Endurance and, once stranded on the frozen sea, salvaged two for his men to carry across the ice to the open water. Two life rafts could carry all of his men and an extra one would require a significant increase in time and energy to transport across the ice floes. But as his expedition set out carrying the life rafts, it became apparent that the boats, their tickets to survival, were at serious risk when carried across the jagged ice of the Weddell Sea. Two days later and less than two miles from Endurance, Shackleton changed his approach again, establishing Ocean Camp on the ice. They would return to Endurance to restock their provisions and retrieve the third life raft to maximize their chances of survival. And then they would tactically wait for the right conditions, relying on the ice floes to carry the men, and the rafts, to the open ocean.

Shackleton also allowed Leonard Hussey to bring his banjo. In fact, he ordered it. Why carry a banjo to the far end of the world? And why, when the crew’s very survival was on the line, would Shackleton order Hussey to keep his banjo? The answer is much bigger than a simple musical instrument. While Shackleton permitted the men to each take with them the clothes on their backs, extra socks, two pairs of boots, a sleeping bag, and two pounds of personal gear, he recognized that their physical needs would be taken care of, but their mental wellbeing was another factor altogether. While not much, the gift of music—and the camaraderie that it brought forth in the men when they were not fighting the elements for survival—was essential to the expedition’s wellbeing and the crew’s ability to prevail mentally, as well as physically.

Next, while Shackleton left the Bible behind, he instructed each man with a journal to keep it for the remainder of the expedition. It is from these journals today (Hurley’s, Orde-Lees’s, Shackleton’s) that one can learn from Shackleton’s trials, from both his decisive acts of leadership and his failures. Had it not been for these journals, the literature for the next crop of on Antarctic explorers would be as stagnant as the ancient parables he left in the snow. Instead, by consciously evaluating the circumstances and prioritizing a learning culture, even if it weighed down his expedition, Shackleton improved all future generations who studied his work. He knew that to succeed at crossing the Antarctic, the next expedition must not start from the same baseline of knowledge that Shackleton had when he set sail.

The US Military’s Shackleton Moment

Shackleton was an imperfect leader but over the course of his ill-fated expedition, he made a series of impactful leadership decisions that ultimately saved the lives of all the men under his care, who were rescued more than nineteen months after Endurance became immobilized in the frozen sea. Analyzing the situation, Shackleton realized that the crew’s mission had changed and his expedition must adjust accordingly. He knew not everything he had accumulated over his journey would help him with the task at hand; in fact, many of his belongings, intended for his prior mission, could in fact be a liability as the men fought for survival. But he also knew where to focus his attention—on the fundamental tools of his trade. He knew that without his life rafts, he was dead. He similarly recognized how vital the sleds—and the dogs capable of pulling them, were if they were to cross the frozen, jagged ice. It was these physical resources, along with the mental wellbeing of his men, that would carry them to survival, and he made the protection of these resources his utmost priority. And if they survived, he made sure that their journals told their story, a decision that would benefit those who would follow him in pursuit of the mission of Antarctic exploration.

Today, the US military should learn from Shackleton’s century-old story. Just as the sea ice slowly encroached on the Endurance, the years-long reorientation toward large-scale combat, multi-domain operations, and great power competition has changed the US military’s mission. As the country shifts away from twenty years of post-9/11 wars and embarks on a journey of strategic competition, it is a leader’s job to set the tone for their organization. Much of today’s US military has only ever known the counterterrorism and counterinsurgency missions, including leaders for whom Iraq and Afghanistan serve as their primary frame of reference, but who are now on operational staffs or commanding tactical units. Unless they embrace their very own Shackleton moment, the US military will be ill equipped for the next phase of its journey.

This brings us back to the two questions today’s military leaders should ask. First, what have I accumulated over the last twenty years that could be my downfall in the next chapter of my journey? Standing in the way of survival in strategic competition might be that weapon system made of gold, the doctrine written on the false assumption of a unipolar world, or the unwillingness to remove those who cannot pull their weight. And second, what do I have that is going to save my life no matter my future circumstances? Every corner of the military is full of resources that might have been under-utilized in the past, the fundamental tools that we have perhaps overlooked in recent times. For all of us, the mission has changed. To succeed, we must do our part: What do we take, what do we leave behind, and what must we cull?

Neils Abderhalden is an Air Force officer and student at Air Command and Staff College. He has numerous deployments in support of overseas contingency operations. 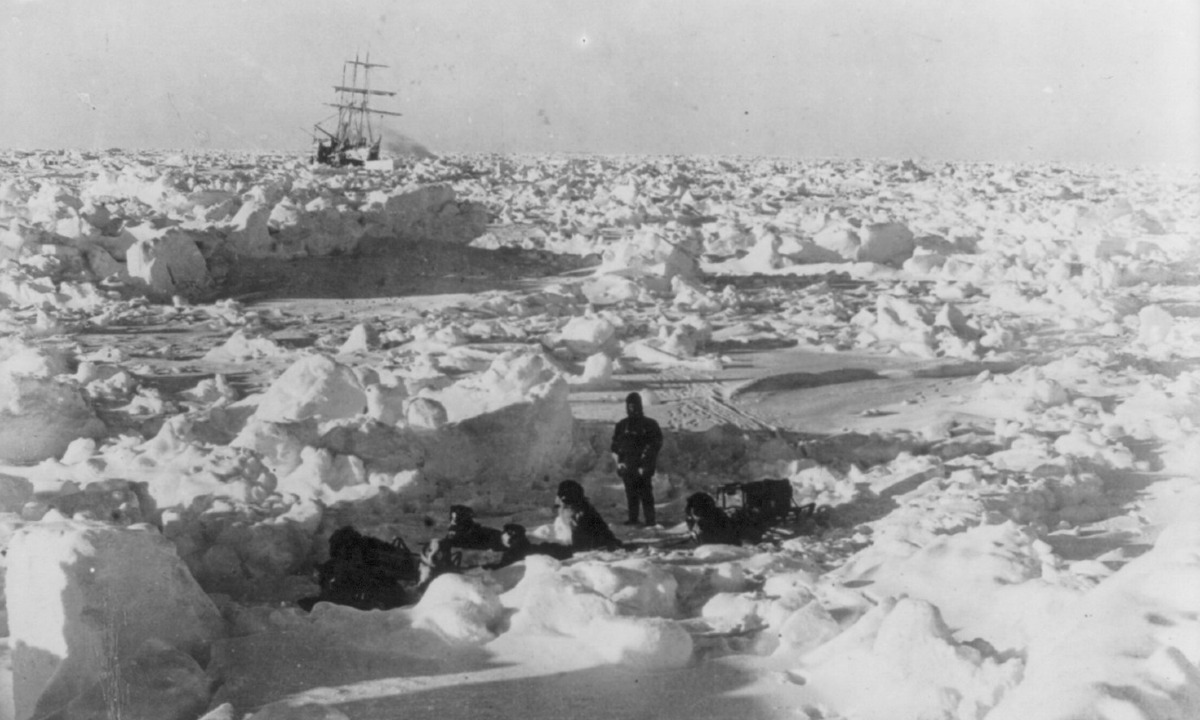