Putting the Sting in the Tri-Service Maritime Strategy: A Vision for the Future of the MAGTF – Modern War Institute

This full story is found on MWI: Putting the Sting in the Tri-Service Maritime Strategy: A Vision for the Future of the MAGTF – Modern War Institute:

The newest US maritime strategy, Advantage at Sea, fails to include the Marine Air-Ground Task Force (MAGTF) as a viable operational component for competition in the gray zone. Though Advantage at Sea recognizes the ever-growing Chinese maritime threat, it does not provide a practical way for the United States to address that threat. As the Marine Corps reshapes itself through the guidance in Force Design 2030,it must take the opportunity to create a forward-deployed, commando-like force to fill the gaps present in Advantage at Sea. Doing so offers a way to counter China by using disruptive and asymmetric means to both coexist with and deter competitors and, if necessary, fight at sea.

Strategically, the United States currently lacks an appropriately sized, robust force to conduct gray zone operations. The Marine Corps is the most naturally suited to become that service-level asymmetric component. To be a competitive force against asymmetric actors such as the China Coast Guard and the People’s Armed Forces Maritime Militia, the Marine Corps must pivot toward an operating concept and organizational design that is smaller, is self-sustainable, and can adapt as needed. The operational answer is the “wasp MAGTF,” which emulates a swarm of its namesake. The wasp MAGTF would be a maritime force that is consistently deployed, distributed in small units, and conceptually in line with Distributed Maritime Operations. Furthermore, the wasp MAGTF’s missions would be different from what the MAGTF does today.

In nature, an individual wasp exists as part of a group. Highly organized, wasps cooperate to build nests, hunt insect pests, gather nectar, and form colonies. Individual wasps also have the ability to attack when disturbed, but often do so in a swarm. The wasp forms part of a swarm to protect the nest, releasing pheromones to warn other wasps of danger. In essence, a wasp is individually small but collectively mighty.

Similarly, as an operating concept, the wasp MAGTF would exist as one part of the larger operational environment. To be effective and support Advantage at Sea’s objectives, the wasp operating concept requires a MAGTF that can scale the required components to conduct direct action, foreign internal defense in the maritime domain, unconventional warfare, special reconnaissance, and civil affairs to address contingencies and threats. While these mission sets are traditionally the purview of special operations forces (SOF), the size of SOF limits their ability to be a theater-wide deterrent. By contrast, the Marine Corps is large enough to provide adequate manpower to address the problem at scale.

In business, disruptive innovation is a competitive process through which a well-established competitor is upended when a relative upstart introduces less expensive and more accessible products that are surgical and agile enough to address market needs. Often, the upstart targets market segments that have been overlooked, delivering an alternative product to fill the gaps. These innovative products are burdensome for the established market leader to adapt for and respond to. Disruption forces established businesses to alter their processes, adapt, or lose—how Blockbuster fell to Netflix. For an emerging competitor, success is not predicated on mirroring well-established capabilities; instead, success is achieved by understanding the incumbent’s gaps and countering them with more agile capabilities.

Over the past decades, competitors have leveraged disruptive innovations and techniques to challenge US tactical and operational practices. In Iraq and Afghanistan, the United States invested billions of dollars in sustaining technologies to compete with insurgents making improvised explosive devices (IEDs) using locally available munitions. Looking to the Indo-Pacific, the Chinese recently transformed a cargo ship into an aircraft carrier and have consistently employed asymmetric forces in contested areas. In order to project power, the United States, on the other hand, remains tied to Ford-class aircraft carriers with price tags of over $11 billion per ship. As with the insurgent-built IEDs and Mine-Resistant Ambush-Protected vehicles (MRAPs), the price differential between a cargo ship and an aircraft carrier is staggering.

Chinese efforts at disruptive innovation alone do not foretell American defeat. Enter the wasp operating concept and the Marine Corps. By becoming a commando-like maritime force that is smaller, is self-sustained, and can swarm in response to aggression or hostility, the Marine Corps can be the counter–disruptive force within the competition continuum. Overall, the commandant of the Marine Corps, General David Berger, is actively reshaping the force and eliminating capabilities that do not support vigorous expeditionary operations conducted in support of fleet operations. To become the wasp, the Marine Corps needs to double down on this effort and continue to reduce its size and divest in irrelevant assets to resemble a more modular force, in line with the direction the British Corps of Royal Marines is taking. The Royal Marines have already cut tanks, MRAPs, and amphibious assault vehicles, and are in the process of streamlining and restructuring their artillery assets. The US Marine Corps should look to its British peer as a model.

The Marine Corps will need to make structural, equipment, doctrinal, and personnel changes in order to become the wasp and meet the requirements of Advantage at Sea. Most, if not all, will be significant changes and a break from the past. Nevertheless, adopting the wasp operating concept is essential to counter the Chinese threat.

Current Marine Corps structure is built around the MAGTF, which relies on antiquated strategies that do not match needed capabilities. The MAGTF is a scalable construct consisting of four distinct components: a ground combat element, an aviation combat element, a logistics support element, and a command element. It is scalable in size, ranging from a special purpose MAGTF of roughly two thousand Marines and sailors to a Marine expeditionary force of over sixty thousand. Traditional MAGTFs are amphibious, employing naval assets for transportation and logistical support. The MAGTF’s most commonly deployed unit is the Marine expeditionary unit, which is built around a reinforced infantry battalion and composite aviation squadron.

Marine Corps structure is slowly changing with incremental shifts to the Marine littoral regiment (MLR) as the force’s main effort. The MLR is a smaller, more autonomous unit than its predecessors but continues to rely on sustained technologies and organizational paradigms to pit conventional means against asymmetric ones. The MLR remains housed in the Marine division, which has traditionally been the Marine Corps’s main effort. The long-term solution is to divest from the Marine division as the main effort and focus on Corps-wide interoperability with its maritime sister services by producing scalable direct action, foreign internal defense, unconventional warfare, special reconnaissance, and civil affairs forces to minimize costs and maximize output.

Instead of continuing to rely on and invest in ships made vulnerable by Chinese sensors and weapons within a weapon engagement zone, the Marine Corps will need light, reliable, and replaceable maritime assets. As part of the transition to the wasp operating concept, the Marine Corps will no longer need large deck amphibious ships but instead should acquire platforms such as the Light Amphibious Warships, autonomous vessels, and patrol boats. These ships need to be capable of operating organic loitering munitions, long-range fires, and electronic warfare technology.

Overall, the wasp MAGTF would have a vastly different table of equipment than a current Marine expeditionary unit. Internally, the first place to start would be looking at the commandant’s overinvestment list and identify short-term acquisition efforts toward maritime and distributed capabilities. It should both own and employ the Mark VI patrol boats or Combat Boat 90s. These vessels are small, cost-effective, and agile craft capable of swarming over the long distances in US Indo-Pacific Command’s area of responsibility. Using proven maritime technology, the wasp MAGTF would provide a skillset and platform on which to test and refine small-unit maritime capabilities until long-term acquisitions can be made. Fires and reconnaissance capabilities can be enhanced by including autonomous vessels at the small-unit level. Once ashore, lightweight vehicles should provide mobility instead of legacy wheeled vehicles.

Operationally, a wasp MAGTF would operate semiautonomously in the Indo-Pacific, combining the “Warbot” concept proposed by four Marine officers in 2018 with naval expeditionary warfare in actively contested spaces. As such, these small units should be a mix of military operational specialties and skills, similar to the current MAGTF concept. Wasp MAGTFs should incorporate not only traditional combat power and amphibious raiding skillsets but also cryptologic linguist operators; signals intelligence/electronic warfare/cyberspace operations technicians; and intelligence, surveillance, and radio reconnaissance teams. The Marine Corps wasp must also incorporate existing capabilities from sister services to better fulfill its diverse mission set.

As part of the shift to a wasp-like maritime force, the Marine Corps should absorb the US Navy’s riverine capabilities and missions. These squadrons already practice asymmetric warfare, support SOF units, and have the assets to support distributed operations. Existing riverine platforms are also capable of providing expeditionary advanced basing options and use ramp and rails to launch sleds for autonomous vehicles.

Ultimately, the Marine Corps needs to be the wasp that operates in the gray zone, below the threshold of war. To do so, it needs to decouple itself from incrementally building on antiquated platforms, policies, and capabilities. It needs to be offensive and small, and it must operate as the disruptive maritime service. These requirements are significant and will demand institutional realignment, doctrinal shifts, and procurement changes. Becoming the wasp cultivates the very Marine Corps the commandant envisions.

David Laszcz is a Pat Tillman and Harry S. Truman Scholar. He currently serves as the executive officer for MEU Support Company, 2d Radio Battalion. He holds a master’s in public policy from Harvard and previously served at the White House and as an infantry squad leader.

The views expressed are those of the author and do not reflect the official position of the United States Military Academy, Department of the Army, US Marine Corps, or Department of Defense. 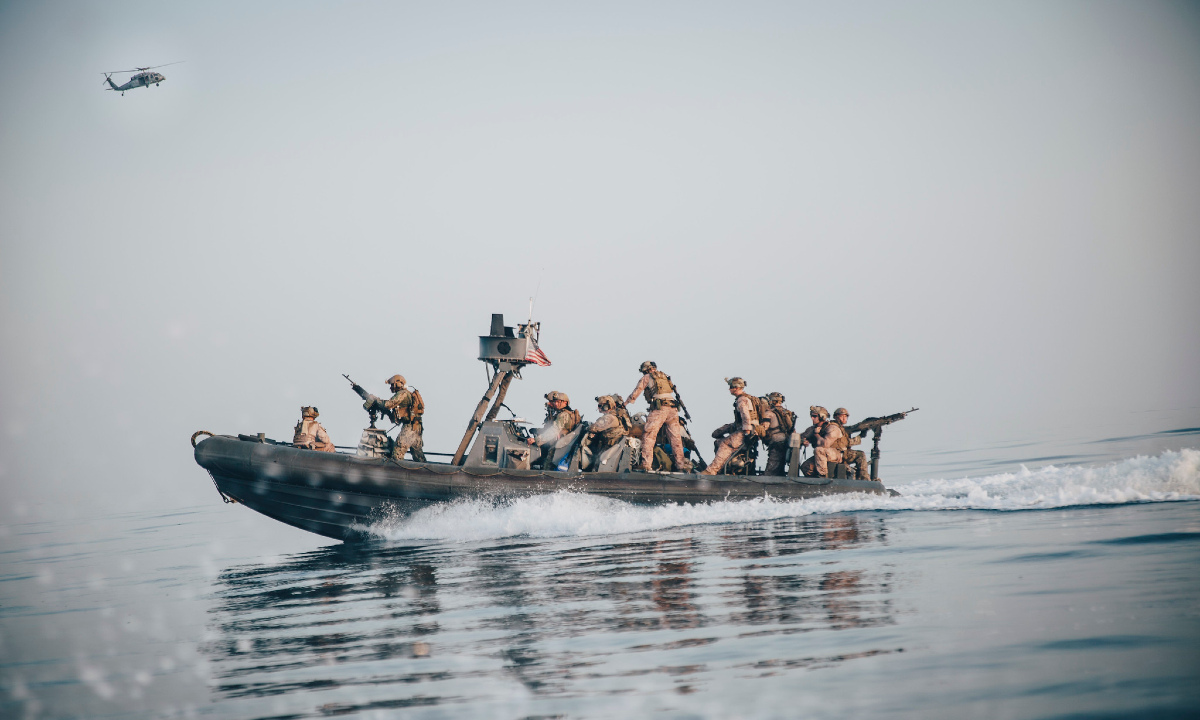