This full story is found on MWI: Lessons from the Philippines: Irregular Warfare in Action – Modern War Institute:

After the attacks of September 11, 2001, the world watched as the United States began a punitive expedition to Afghanistan to kill or capture Osama bin Laden, oust the Taliban, and prevent the use of Afghanistan as a continued terrorist safe haven. But the counterterrorism missions triggered by 9/11 were not limited to operations in Afghanistan, and on the other side of Asia, US forces simultaneously prepared for a counterterrorism mission of an entirely different character. Here, 1st Special Forces Group and Special Operations Command Pacific (SOCPAC) leveraged existing relationships and conducted intensive planning to support the government of the Philippines—a sovereign nation—in operations against terrorists and insurgents within its borders.

Though Operation Enduring Freedom – Philippines (OEF-P) is one of the lesser-known efforts in the global war on terrorism, it had relative success in achieving the US objectives of reducing terrorist operations and improving local governance. The security environment in the Philippines—and the role of US forces there—had distinct characteristics from that of Afghanistan, and it is difficult to say that the counterterrorism approach in one theater should be applied directly in another. However, OEF-P offers some enduring lessons for the US national security community. As the United States considers the lessons of the past twenty years, with no indication that terrorist threats are decreasing worldwide, strategists and policymakers should study OEF-P as they prepare for future irregular warfare campaigns against terrorists and insurgents around the globe.

Throughout Philippine history, election violence, clan conflict, and separatist insurgencies have threatened stability. Beginning in the 1970s, insurgent groups such as the Moro National Liberation Front (MNLF) and Moro Islamic Liberation Front leveraged the grievances of the Moro population to pursue independence in the southern region of Mindanao and the Sulu Archipelago. Other terrorist and insurgent groups such as the Abu Sayyaf Group—which formed in the early 1990s as an offshoot of MNLF—and Jemaah Islamiyah led violent attacks and abductions in the region with a similar aim of establishing an Islamic state. The United States assisted Philippine forces in countering these groups in the late 1990s and early 2000s, and after 9/11, US interest in Philippine operations increased due to the Abu Sayyaf Group’s and Jemaah Islamiyah’s close links to al-Qaeda. These US advisory efforts evolved into Joint Special Operations Task Force – Philippines (JSOTF-P), which began operations under the OEF-P campaign in January 2002.

It was soon apparent to US policymakers that OEF-P was a critical component of the global war on terror. Thus followed an expansion of US assistance to execute OEF-P, which was made possible not only by high-level decisions by national leadership, but by close cooperation among multiple stakeholders within the US government and between the US and Philippine governments and militaries.

OEF-P was built on years of relationships between US special operations forces (SOF) and the Armed Forces of the Philippines. This planning effort included a strategic assessment that identified the full range of threats to stability and sovereignty in the Philippines and ensured understanding of the problems the Philippine government faced in the south in Mindanao and the Sulu Archipelago. The result was a campaign plan that conducted foreign internal defense through a special warfare approach and employed all of the major elements of special operations, including Special Forces, psychological operations, civil affairs, naval special warfare, and special operations aviation (Army and Air Force). In addition, enabling elements from all of the services, the US intelligence community, US law enforcement, the US Agency for International Development, the US embassy country team in Manila, and civilian contractors supported the operation.

The campaign plan employed four lines of effort executed by JSOTF-P. First, JSOTF-P trained, advised, and assisted host-nation security forces (military and law enforcement) in their defense against lawlessness, subversion, insurgency, and terrorism. Second, it conducted targeted civil-military operations to gain access to contested areas and to reduce the population’s support of insurgents and terrorists. Third, it provided intelligence support to enhance the effectiveness of host-nation operations. Fourth, JSOTF-P conducted influence operations to separate the population from insurgents and terrorists and to ensure the legitimacy of both the host nation and US support.

Sustained operations continued throughout Mindanao through 2014, at which point the effort transitioned to a steady state of US SOF advice and assistance and JSOTF-P stood down. While threats continue to persist in the Philippines and throughout Southeast Asia from violent extremist organizations, the Armed Forces of the Philippines have matured with the support of the United States and, in particular, US SOF.

This operation would likely never have happened if not for those working behind the scenes. The late Ambassador Michael A. Sheehan and the late General Wayne A. Downing each played a unique role in making OEF-P possible. In addition, personal relationships between US and Philippine military personnel provided important foundations for trust.

When Ambassador Sheehan was the State Department’s coordinator for counterterrorism, he recognized the persistent terrorism problem in the Philippines and the inability of the Philippine government to effectively counter the threat. He took the initiative and secured funding to stand up a Philippine national counterterrorism force in 2000–01. SOCPAC received the mission and ordered the 1st Battalion, 1st Special Forces Group based in Okinawa to plan and conduct a mobile training team mission to organize, train, and equip what came to be called the Light Reaction Company. This company then deployed to Basilan—the northernmost island of the Sulu Archipelago—to participate in operations against the Abu Sayyaf Group. At that time, US advisors were prohibited from deploying with them and were therefore unable to continue advising and assisting the Light Reaction Company through its mission. However, this training and the continued development of close working relationships both with the Light Reaction Company and throughout the Philippine military paved the way for the eventual execution of OEF-P, which did include advisors assigned to the Light Reaction Company.

Meanwhile, the OEF-P campaign plan likely would not have been executed without the influence of General Downing. Once the strategic assessment was complete and Colonel David Fridovich, commander of 1st Special Forces Group, briefed the campaign plan to the combatant commander, it was sent to the Pentagon and then ultimately to the White House for approval. At that time, General Downing was the counterterrorism advisor to the national security advisor, and he recommended approval of the campaign plan in the Philippines to Dr. Condoleezza Rice. However, when the plan was presented to the president, the late Secretary of Defense Donald Rumsfeld argued against execution. Rice reminded the president of the US-Philippine mutual defense treaty and prior US commitments to the Philippines, and the president ultimately approved the plan based on a promise he had made to then Philippine President Gloria Macapagal Arroyo that he would assist her with the fight against terrorism.

Thus, without the vision and behind-the-scenes support of both Sheehan and Downing, OEF-P would likely not have been approved and executed.

In addition, US Special Forces noncommissioned officers built the foundation for trust through their long-term, on-the-ground relationships. As military officials made plans for training the Light Reaction Company, a noncommissioned officer who had relationships with Philippine general officers facilitated the agreements that led to the successful establishment of the national counterterrorism force. In another case, a relationship established through the International Military Education and Training program in the United States fifteen years prior to the mission between a US commander and a future Philippine general officer was instrumental in providing initial access during the post- 9/11 planning and assessment efforts and later for support to JSOTF-P operations. Such local-level personal relationships, not only with tactical military leaders but also with civilian village officials, also resulted in superior force protection through early warning from the local population.

Lessons for the Future

Although the Department of Defense appears to be shifting away from counterterrorism and counterinsurgency due to the withdrawal of US forces from Afghanistan and a growing emphasis on great power state competitors, the National Defense Strategy’s Irregular Warfare Annex highlights the need for the United States to sustain irregular warfare capabilities and employ them as a component of great power competition. This competition is really a form of political warfare, and irregular warfare is the military’s contribution to a whole-of-nation political warfare effort. OEF-P provides many lessons that can be applied to irregular warfare in the context of great power competition.

First, when working with a host nation, respect for and protection of sovereignty is key to sustaining the legitimacy of the host nation, its military, and the US military and interagency commitment. The JSOTF-P mission statement stressed this and guided operations, and it may provide a template for future irregular warfare operations.

Second, operations in the Philippines took place in the human domain, and irregular warfare is first and foremost a human endeavor—and training efforts should reflect this reality. The pre-9/11 focus on developing unconventional warfare capabilities through Special Forces, psychological operations, and civil affairs unit-level training enabled US advisors to assist the US interagency and the host nation in solving complex political-military problems. It was this unconventional warfare training that allowed the force to deploy into a complex political-military environment, develop a campaign plan, and support US national security objectives.

Third, all planning for OEF-P was based on thorough and continuous area assessment, which is a fundamental SOF capability. From developing the initial campaign plan to extending operations in conflict areas throughout the southern Philippines, assessments provided the deep knowledge and understanding necessary for effective operations. Host-nation training, targeted civil-military operations, and influence operations all relied on these detailed assessments.

With the withdrawal of US forces from Afghanistan, al-Qaeda and the Islamic State could seek to expand their presence in Southeast Asia and try to replicate al-Qaeda’s efforts from the 1990s and 2000s, as well as the Islamic State’s activity after the drawdown of JSOTF-P in 2014. Lessons from OEF-P provide a starting point to support not only the Philippines against these threats, but also to support other countries in Southeast Asia if these threats expand again.

Further details on the execution of OEF-P can be found in chapter 21, written by David Maxwell, of the Routledge Handbook of U.S. Counterterrorism and Irregular Warfare Operations, edited by Michael A. Sheehan, Erich Marquardt, and Liam Collins. The book is the topic of discussion in an episode of the Irregular Warfare Podcast, “An Un-American Way of War: Why the United States Fails at Irregular Warfare.”

David Maxwell is a retired US Army Special Forces colonel who commanded the 1st Battalion, 1st Special Forces Group, in Okinawa and on Basilan Island, and later the Joint Special Operations Task Force – Philippines. He is the editor of Small Wars Journal and a senior fellow at the Foundation for Defense of Democracies. David was also a guest, along with Deak Roh, on an episode of the Irregular Warfare Podcast, “Breaking the Boom-Bust Cycle of Irregular Warfare.” 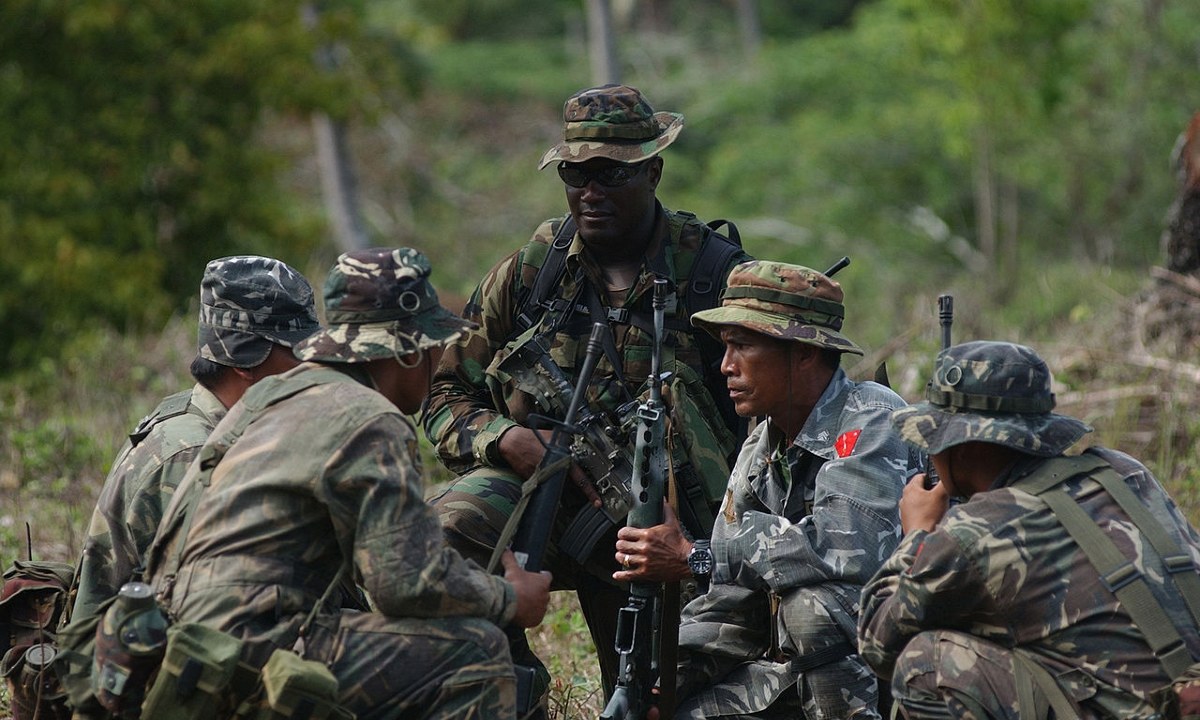