How to Integrate Competition and Irregular Warfare – Modern War Institute

This full story is found on MWI: How to Integrate Competition and Irregular Warfare – Modern War Institute:

Ever since the 2018 National Defense Strategy, the watchword for the US military has been competition. “Inter-state strategic competition, not terrorism,” the NDS declares, “is now the primary concern in U.S. national security.” But in the two years since the document’s publication, how exactly the Department of Defense might best address competition has remained a subject of intense debate. And at the same time as the joint force attempts to incorporate competition into doctrine, it has also begun to readdress irregular warfare, publishing an annex to the defense strategy in 2020 in an attempt to institutionalize irregular warfare as a core competency.

The two priorities of competition and irregular warfare have become conflated with one another. In fact, the Joint Staff has renamed its Office of Irregular Warfare the Office of Irregular Warfare and Competition. These new priorities have led to much introspection on the inability of joint doctrine to address the totality of warfare. One issue derives from the conceptual limitations placed by current doctrine on warfare as a violent struggle. Such a definition fails to address the realities of current interstate competition, which often entails nonviolent means. Take unconventional warfare, for instance. Supporting the armed component of a resistance movement would certainly qualify as violence, but opposition to an oppressive government can come in many forms; assisting a resistance movement that is employing nonviolent protests can prove decisive. The mass movement that brought down the Berlin Wall, for example, accomplished far more than an armed conflict ever could have.

Irregular warfare within states actually occurs along a broad spectrum of conflict, depicted by the graph below. This resistance continuum includes nonviolent protest, illegal forms of protest, and escalating categories of violence ranging from rebellion to insurgency to full-scale belligerency. The United States, as an external actor, can either use foreign internal defense, stabilization, counterinsurgency, or counterterrorism to quell unrest in a partner nation, or it can utilize unconventional warfare to support resistance. Many of these may entail nonviolent measures, which require greater clarity in joint doctrine.

The Department of Defense has been writing strategy, doctrine, and policy for decades, and so it seems peculiar that nonviolent competition remains unaddressed in the contemporary joint lexicon. During the Cold War, the United States used the term “low intensity conflict” to describe a range of methods for competing with the Soviet Union around the globe. Using influence activities in some cases, offering economic incentives in others, while providing military support elsewhere, the United States countered the Soviet Union without resorting to traditional war. Instead, the Soviet ideology and economic system was defeated by convincing the majority of nations to support a global order built on cooperation, international law, and national sovereignty.

Following the fall of the Soviet Union, the techniques used by the United States to address strategic competitors were neglected. Between 1990 and 2016, a new period of global cooperation emerged. Without a clear strategic competitor, the United States fought irregular wars for two decades against state and nonstate actors who opposed the international order. Today, however, as scholars such as Leo Blanken and Barry Posen have argued, the United States’ liberal hegemony appears to have eroded. China’s and Russia’s opposition to the current world order, and the activities of malign actors such as Iran and North Korea, have contributed to a strategic environment defined increasingly by competition.

The competitive strategies adopted by two nations have the Department of Defense especially concerned. The first is what the Chinese Communist Party introduced as unrestricted warfare. In basic terms, this approach involves a broad array of nonmilitary types of antagonism, including the use of illicit networks, industrial espionage, cyberattacks, propaganda, bribery of public officials, and intimidation—all of which intentionally avoid direct military confrontation with the United States. An example of this approach includes the deployment of a huge Chinese maritime militia composed of hundreds of commercial fishing vessels to drop anchor on disputed islands in the South China Sea. These provocative actions are meant to intimidate the region in order to enforce China’s territorial claims without deploying the People’s Liberation Army Navy.

Russia’s new generation warfare is the second approach to competition that has alarmed the United States. This strategy combines nuclear, conventional, and nonmilitary instruments to produce strategic deterrence, while at the same time offering tools to accomplish strategic goals without international interference. During Russia’s forcible annexation of Crimea from Ukraine in 2014, it used subversion, proxy forces, direct military intervention, and coercion to achieve its objectives. With a blend of intimidation, soft power, and irregular activities, Russia accomplished its strategic objectives through actions short of traditional war, leaving the United States and its European allies incapable of a swift and strong response.

These novel approaches to warfare by the Chinese Communist Party and Russia (unrestricted and new generation) are only two categories in the ever-growing list of terms to describe modern interstate conflict, which includes gray-zone conflict, hybrid warfare, legal warfare, drug (or crime) warfare, cyberwarfare, economic warfare, trade warfare, religious warfare, proxy warfare, and many others. None of these terms fit nicely into the current joint taxonomy of concepts regarding war. The primary constraint remains that joint doctrine generally addresses military capabilities in terms of violent action (or support for violent action), while many of the evolving approaches to competition use nonviolent means. In the United States, the Department of Defense has played an increasingly influential role in security cooperation, but it is still playing catch up when it comes to the inclusion of nonviolent competition into doctrine.

In a recent article, Eric Robinson brilliantly outlines “the missing, irregular half of great power competition,” suggesting that traditional warfare and irregular warfare definitions may not need significant revision. Instead, Robinson argues that the Department of Defense should incorporate the missing half of related nonviolent conflict by adding both irregular competition and conventional deterrence to the spectrum of nonviolent conflict. Examples of conventional deterrence include establishing alliances, forming coalitions, fostering partnerships, creating trade agreements, and supporting international law. These nonviolent tools, managed primarily by other government agencies, deter overt aggression against the United States from opponents.

Equally important to this new sphere of conventional deterrence, irregular competition addresses interstate conflict short of war (commonly referred to as “left of bang” activities). Irregular competition includes the use of statecraft, military engagements, and economic incentives to either partner with or intimidate middle powers and developing countries. From a Department of Defense perspective, it describes military activities deliberately used to gain influence, from freedom-of-navigation operations in the South China Sea to multilateral training activities in the Baltics. Expanding warfare to include conventional deterrence and irregular competition addresses the totality of competition terminology.

A Prerequisite for Sound Strategy

While challenging, incorporating both competition and irregular warfare into the joint lexicon may not require a massive overhaul of doctrine. The solution requires expanding the scope of unconventional warfare, foreign internal defense, counterinsurgency, counterterrorism, and stabilization to more systematically address nonviolent aspects. At the moment, these activities are overly constrained by the irregular warfare definition of violent struggle. In fact, irregular activities have always included nonviolent tactics that require greater emphasis in strategy, policy, and doctrine. With this in mind, the model below expands our understanding of warfare in general and demonstrates a more holistic approach to irregular conflict specifically by overlaying the spectrum of violent to nonviolent engagement on Robinson’s model for each of the key irregular warfare activities.

Stabilization inherently encompasses a nonviolent approach to address irregular threats. Unconventional warfare, counterterrorism, and counterinsurgency all arguably use primarily violent means of struggle or irregular warfare, although they also include significant nonviolent actions, while stabilization activities and foreign internal defense generally fall within the realm of nonviolent irregular competition. In the case of unconventional warfare, for instance, a growing number of scholars have argued that fomenting dissent in an opponent’s population could occur prior to establishing a relationship with a dissident or guerrilla group. Cyber activities, for instance, represent a particularly effective and growing nonviolent approach to competition and are applicable to all forms of irregular war.

Unconventional warfare, foreign internal defense, counterinsurgency, counterterrorism, and stabilization all encompass a spectrum of irregular activities running from nonviolent to violent. By emphasizing violent aspects, the Department of Defense is overlooking some of the most effective means of competition. The recognized goal of irregular conflicts revolves around legitimacy and influence over relevant populations. People are influenced by violence and threats of violence, of course, but equally by factors including money, ideology, religion, and culture. Empowering women through education, for instance, can prove more effective in addressing irregular threats over the long term than killing insurgents. Employment opportunities for young adult males can act as a deterrent to recruitment by armed groups. Only by employing a comprehensive approach that includes nonviolent means can US efforts effectively stabilize a partner or destabilize an opponent.

In summary, current joint doctrine constrains our understanding of warfare by offering only two kinds, traditional and irregular, both of which necessarily entail violent action. Broadening our understanding of warfare to include nonviolent activities, including deterrence and irregular competition, provides a more enhanced perspective on conflict as a whole. In particular, the inclusion of irregular competition into theater engagement plans allows the Department of Defense to more effectively address both nonstate opponents and strategic competitors. Such a change in the description of warfare would require revision of Joint Publication 1, which is the cornerstone of all doctrine in the armed forces. An expanded framework would reiterate the necessity of a whole-of-government approach and the importance of nonviolent means of addressing threats. Adopting this change will solve the Department of Defense’s current quest to incorporate strategic competition into doctrine, concepts, and policy—the first step in mounting a successful response to the challenge of great power competition.

Robert S. Burrell is a retired Marine, award-winning World War II historian, and PhD candidate at Warwick University. He currently teaches irregular warfare at METIS Solutions for Joint Special Operations University. The views stated in this article are his own and do not necessarily represent those of the Department of Defense. 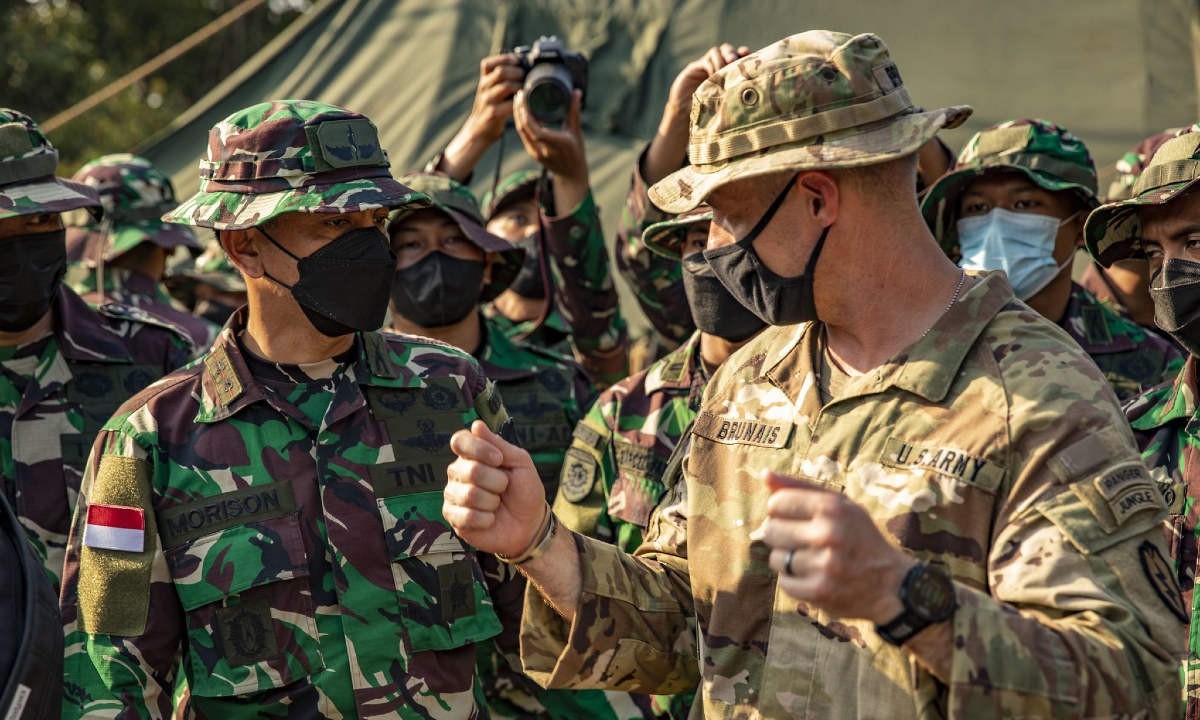